I woke up outside shy of 4:00 a.m., cold and in the dark, to a chorus of wolves yipping, barking and howling far off in the distance.

I decided to rekindle the fire I lit before going to sleep. I pushed back my warm covers to a barrage of cool air hitting my face. I poked at the embers, seasoned their glow with leaves and twigs, then threw on three more logs and breathed life back into the fire that sparked, snarled and snapped back at me. Dan slid off his side of our air mattress to take a leak. Climbing back into bed, I pulled our flannel comforter over my head, peaking out enough to allow a breath of cold air in, and a small window out to see the flames, which roared sideways in my direction like a woman’s fiery orange hair come alive. An owl in the trees nearby who whooed and the loon’s wails echoed, haunting the lake until dawn. When I awoke a few hours later, the birds were chirping, a few Blue Jays squawking, but it was the sound of the busy bees buzzing to and fro, choosing their flower, buzzing off into the trees surrounding me, that filled my ears. I spotted their hive high up in a birch tree.

We were at our cottage, and the night before was calm and serene. I raked out our fire pit to create a flat surface, then laid two logs down parallel, filling the space between them with leaves, twigs and bark, arranging my kindling down across the two logs like a bridge. The fire caught beautifully. Dan fished off the dock with Penelope and Elyse, and I swam with Ariel and a neighbour as the sun sunk into the shadowed hills. By the time the swimming was done and the stars were out, one log laid nestled against the other like a burning work of art. We sat with the girls, working on a crossword together by the fire, roasting oversized maple marshmallows. Finally, bedtime for the kids, but I wasn’t ready to leave the perfect fire and still night, not yet. Dan ushered the girls into their beds, and I sent him a text.

I looked up from the fire to find him standing at the window of our screened-in porch above me.

“I know what you want to do,” he called down, and I saw him roll his eyes, a slight shake of his head with a smile across his lips. Dan has an uncanny ability to read my mind. He knew EXACTLY what I wanted to do that night.

In the few days before, I had one of my BIG Ideas. The last time I had a big idea, we ended up selling our home and traveling around the world as a family. This new big idea revolved around a potential future book project for which I was compiling a list of experiences that intrigued me. Not a bucket list—exactly—more of a loving living life list. One of the experiences was to sleep under the stars.

Once I get an idea in my head, I have a strong desire to carry it out. Dan barely resisted the idea of sleeping outside the cottage all-night, though his initial text reply was: I don’t care to. With the temperature dropping to twelve degrees Celsius overnight, I would need his warmth and feel safer tucked into his side. I was relieved it wasn’t that much work to convince him. The last thing Penelope said to me before falling asleep was, “Don’t get eaten by a bear.”

With our plans for the night in place, we set to work.

“You get the tarp, I’ll blow up the air mattress,” Dan said. We set the air mattress on top of the tarp, and Dan emerged from the cottage with an armful of bedding. We layered up, I added a few more logs to the fire and the two of us laid side by side looking up through a window of trees at a bowl of stars. “Did you see that?” I asked him. We both had. The distinct glow of a shooting star pulsed and then faded across the sky, an astral firework. We kissed goodnight and rolled into each other for warmth, me in my hoodie, socks and flannel PJ bottoms, him in shorts and a long-sleeved tee. Dan’s light snores cast out into the night, while I laid on my side, gazing serenely at the fire until nodding off into an easy sleep.

So how did the night go? Dan slept somewhat fitfully, waking around two, three, and four a.m., while I fell asleep somewhere close to midnight and got up closer to four to mess with the fire, which, I learned, does not provide much warmth unless you nestle up fire-hazard close. While my body didn’t benefit from the fire’s warmth, my face turned toward it did, and I basked in its warm glow.

At one point, at some ungodly hour, the distinct sound of a twig snapped nearby—quite close to us. Dan tensed beside me, waking us both up. I slid down further underneath the comforter while Dan lifted his head. I thought of the mink that lives by the water’s edge in front of our cottage, and the large fisher, a bear-like creature with claws that our neighbour saw passing by the top of his driveway the other day; as well as the porcupines the Madawaska Valley is named after, skunks, racoons and of course, the bears, which I have only seen forty-five minutes away in Algonquin Park. No further sound. Within a few minutes, Dan’s breathing slowed again, and I fell back asleep to the rhythm of his easy snores and the comfort of the fire. The sound was likely a chipmunk scurrying in the rock pile above our heads where they live. In the night, every sound is amplified.

When the sun rose, I assumed I’d wake and slide right into the lake for an early morning dip, but it didn’t happen that way. The stars subsided, giving way to a cyan sky. Dan left the warmth of our nest to go fishing and I pulled the comforter back over my head until way, way after the sun came up. I sank further into daytime sleep. I wanted to hold onto the dream of the wolves howling in the night with my eyes closed a little bit longer, a little bit longer, listening to the bees and the birds, knowing it had all been real. 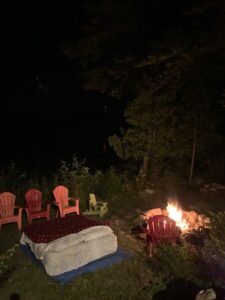 On Being A Happy Person