Our habits are strong, so completely ingrained in us, it’s hard to break free.  I rounded my usual corner at the library and came face-to-face with this crimpy-haired bug-eyed woman sitting at my regular table in my spot.  How ridiculous a claim, my spot; like kindergarteners fighting over a chair who need Xs on the carpet to denote their personal space.  I was carrying a heavy load and made like I was going to dump it off there on her table, my table, but I caught myself – I’m sure the bug-eyed woman noticed – and scanned for another place to set up camp.  We are creatures of habit and breaking out of the mould is difficult – the opposite of commonplace – but there lies adventure and its rewards that await.  Fortune favours the bold.

When I think about stepping outside of the everyday, travel comes to mind.  Several weeks ago, I attended a talk at our local library, by homegrown author Kate Harris, who was there to discuss her incredible and applauded book, Lands of Lost Borders.  An inspiring modern-day adventurer, who very much looks like and is a kind Canadian based in B.C., Kate described her experience of cycling across Tibet with a friend disguised as Chinese tourists.  At one point during her talk, she made an offhand remark that struck me immediately and so I did what writers do and I wrote it down.  That night on my laptop, I typed her words into a blank document, which remained untitled as Document24.  Each time I set to work on my computer, I encountered her words staring back at me and I wondered when I might need them.  That moment is now.

Now here’s the thing.  Reading has certainly taken me all over the place.  To distant times and magical lands, and into grief and through struggles of insurmountable pain.  To the peak of human endurance; to the outstretched wing of a bird and the tip of a friendly octopus’ tentacle.  To Hollywood and surgery, fat shaming and into the shapelessness of water that shifts forms and remembers where we’ve been, strips us bare.  I have physically, with my body, travelled long distances as well.  Around-the-freakin’-world.  Twice.  I did so for the first time when I flew to India in 2014, then again recently with my family.  And I didn’t just fly the distance; we touched down and experienced the world.  We lived it.  But have I yet travelled great distances in my own writing?  I fear not.

During a one-hour stationary bike ride this morning, I finished listening to the audiobook Eat & Run, by Scott Jurek.  This isn’t just a book every athlete – ultrarunner or not – should take in, but one every human should devour.  “Sometimes, you just do things,” became Scott’s mantra for living life, a viewpoint that evolved from his father, who had said the words to him harshly, repeatedly, as a child when Scott questioned the hard labour he was forced to undertake.  Sometimes, you just do things.  Scott took those words to heart, repeated them throughout his life like a mantra. As an ultramarathoner, he ran and then ran some more past the limits the body can take you.  Nearing the book’s end, Scott realizes the answer he has been seeking out his whole life; his true purpose.  He is running to get back to simplicity.  The notion of ‘Doing without doing’, known by the Japanese as Wu Wei.

The book crescendos near the end, and there comes a moment, as Scott is racing for twenty-four hours, when everything else falls away, and he has a monumental epiphany:

Now is enough, now is everything.  That day Scott Jurek set a new American record, running 165.7 miles in twenty-four hours.  This is what you came for.  Those words came to him while he was running, but not in the context you would expect, not in the context of winning a record.  This is what you came for sounded a lot to him like, Sometimes, you just do things, the words of his father that he had come to shape as his own.  And to that beautiful rhythm, his feet continued to pound against the pavement carving their way through to the next moment.  “There is no finish line,” Scott admits.  Now would have to be enough.

His words spoke directly to my core.  Sometimes, you just do things.  I am no stranger to pain.  But being here, now, can be so difficult.  Even as I try to sit still, the questions come flying at me: which way to go?  What to do next?

How does this all pertain to my writing?  I received an email from a fellow writer with his latest piece attached – the currency of friendship and comradery amongst writers.  I was instantly drawn to how far from his other pieces of writing I had read this current piece was and I knew with certainty that I wanted that creative flexibility, to expand my own creative writing horizons.  The truth is, beyond my blog, most pieces of writing I’ve sought to publish revolve around one topic:  Down syndrome.  This isn’t a surprising piece of information; beyond being a creature of habit, I also hold fierce feelings of loyalty to the topic that lead me down this creative path.  And never disregard matters of the heart.  Down syndrome isn’t even a ‘topic’ I write about; it’s a way I advocate for people with Down syndrome.  There are human beings behind my words, and I never forget that.  And I’m not going to stop writing about Down syndrome, I can’t!  Way too much passion on the subject, YET I need to immerse myself in other waters.  I’ve dipped a toe, here and there, but painted nails do not a diversified writer make.  There is more world, more story, to explore beyond my front door.  And I’m realizing I need to step past that threshold.  I confessed this sin of single-mindedness to my friend, and he said it was cool, that he was glad I noticed I was pigeonholing myself because he was going to gently encourage me to branch out.  This is what you came for.

He wrote to me about the two key factors in making something a story: change and jeopardy and now I’m feeling inspired to take the plunge and write until I’m blue in the face.  He encouraged me to think about our family’s around-the-world trip as a source of inspiration, and a line for a story floated into my consciousness:  Mothers are supposed to play it safe.  We’ll see where that line takes me.  Right now, I’m holding onto an image of breaking waves, my toes curling downward, hiding in the sand.  My hand cupped over my eyes, shielding out the blinding sun.  A scene of dark waters and violent currents in contrast to the florescent pink bathing suits of my children being towed out to sea.

I feel like I am bursting with stories, bursting with life, the question is: which one to write first?  Where do I want to go?  What is it that I came for.

There are no easy answers.  Sometimes, you just do things. 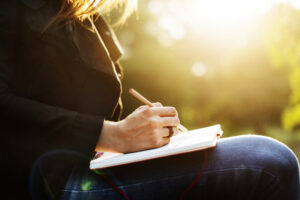 On Teaching: Demystifying the Memoir Workshop